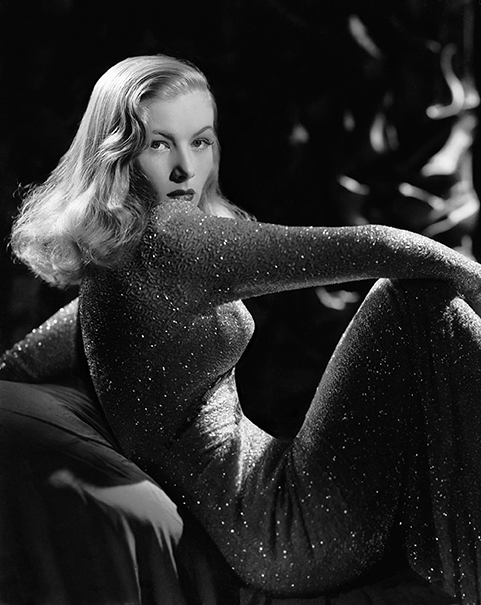 Veronica Lake was born on November 14th 1922, under the name Constance Frances Marie Ockleman. Lake got her start at the Bliss-Hayden School of Acting, after her family moved to Beverly Hills in 1938.

Her first film role was a small part in RKO’s 1939 film, Sorority House. Lake undertook similar roles as a co-ed for her first few pictures.

Sorority House director John Farrow noticed Lake’s distinctive beauty and how she wore her hair over her right eye. The actress was introduced to Arthur Hornblow Jr., a producer at Paramount, and Lake was released from her RKO contract and signed to Paramount in 1941. Hornblow Jr. changed the star’s name to Veronica Lake, with Veronica denoting her classic beauty and a mysterious nature and Lake, in reference to the star’s blue eyes.

The star was often paired with Alan Ladd, as Ladd’s height was a compatible match for Lake’s petite 4’11’’ stature. Costume designer Edith Head used tricks of the eye when dressing Lake, to give the actress a more statuesque appearance. Gowns for the star were kept sleek and simple, with minimal details, often featuring long sleeves and plunging necklines. Streamlined silhouettes, draping along the bust and towering platform heels helped make the petite actress look taller and more curvaceous.

Lake’s beauty and sex appeal made her a pin-up, however, it was Lake’s peekaboo hairstyle that fan’s jumped to recreate. A few tales recount how the stars signature beauty look came to be, a natural wave in her hair, a kink resulting from a clip used on a bad hair day, or that one of her golden tresses had simply fallen out of place at a photo shoot. During the Second World War, Lake changed her trademark to encourage women to wear their hair in a more practical style, suitable for a working environment. A 1940’s newsreel depicts Lake trying out various hairstyles that keep her hair out of her eyes, in hopes of making sure that women working for the war effort wouldn’t catch theirs in any machinery. Though some claim this act of solidarity may have caused a decline in her career, Lake’s signature style has since been replicated and reinvented countless times, by fans, in fashion and on the red carpet.