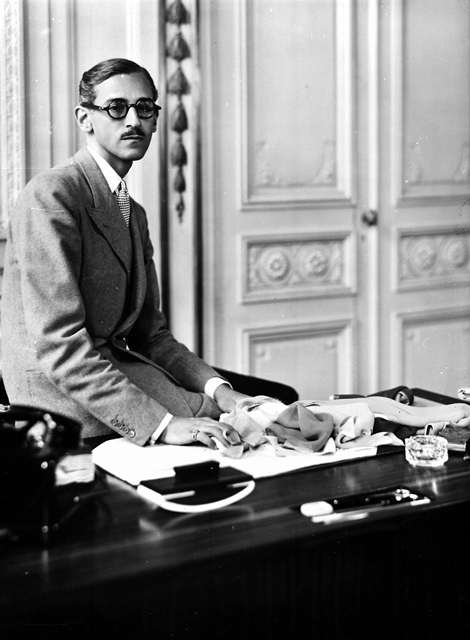 Expected to follow the family profession of banking, Piguet instead moved to Paris in 1918 to study design. While in Paris he secured jobs at both Redfern and Paul Poiret where he learnt each couturiers skill.

Piguet opened his own house in Paris where he designed small amounts himself, but largely relied on the work of freelance designers. A variety of designers worked for him before the outset of their careers including Christian Dior, Marc Bohan, Pierre Balmain and Hubert de Givenchy. Dior said “Robert Piguet taught me the virtues of simplicity …how to suppress.”

Piguet’s designs appealed to a younger customer. He had a sense of Poiret’s use of colour, but with a more simplistic approach and took Redfern’s quality and stability to make afternoon dresses, matching jackets, crisp coats and classic romantic gowns that became a hit with the chic Parisians.

Piguet liked to link art and cultural references to his work. His spring 1936 collection featured romantic references based from the 16th century, including gathered sleeve caps and wide shoulder yokes. During the war Piguet took inspiration, creating a darker mood and accessorizing his models with gas masks.

In 1938 Dior was appointed as Piguet’s regular designer. The strain of producing each collection was so great to Piguet, after each show he would take a long holiday to recuperate.

During World War II the German Government wished Paris haute couture to be moved to Berlin. He defied the German government, refusing to work anywhere outside of Paris.

Piguet closed his house in 1951 and died two years later.

Making a lasting impression through the designers he employed and encouraged, Robert Piguet’s style had a sense of refinement in high elegance. Once called a ‘master of the little wool dress’ by Vogue, he was known for high-style, flair and elegance.