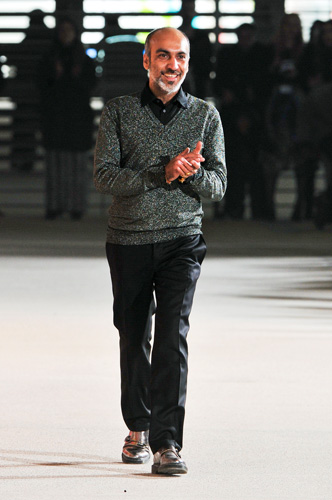 In 1994 Arora won second prize in the Smirnoff Fashion Awards. The following year Arora again took second prize, in the Young Asian Designers Competition. He was also awarded the Most Original Collection.

His quirky aesthetic and recent accolades caught the attention of French Vogue, who offered him a job. However, Arora turned down the proposal, wishing to remain in India to develop his aesthetic further.

In 1997 Arora launched his label and started selling in India. In 2000 he debuted at the first ever India Fashion Week in New Delhi, showing his ready-to-wear collection.

Arora started to move internationally and in 2004 partnered with Reebok to create a line of contemporary sportswear under the name Fish Fry for Reebok.

In 2005 Arora debuted at London Fashion Week. His mix of current style and cultural features was a success and led to him featured in an exhibition at the Victoria and Albert Museum called ‘Global Local’. Here his clothes termed the name ‘Glocal’ – clothes that have a mixture of cultural roots, without ignoring globalization.

By 2006 Arora’s labels were stocked in over 75 stores worldwide. The following year First Fish for Reebok opened a concept store in New Delhi and the Victoria and Albert museum held a retrospective of his London Fashion Week collections.

Having conquered London, Arora debuted his spring/summer 2008 collection during Paris Fashion Week in 2007 to great success.

Arora expanded his business in 2008 adding eyewear to his label and opened up further stores. Together with MAC, a collaboration featuring limited edition Manish Arora cosmetics was launched globally. That same year, Kate Moss was seen dressed in a Manish Arora dress for the September cover of Interview Magazine.

Arora teamed up with SWATCH in 2009 creating a limited edition collection of watches. The year saw further collaborations with Nivea, Absolut Vodka, Good Earth and 3 Suisses. The next year saw Arora work with more brands including Mercedes Benz and Swarovski Elements.

By 2011 Arora had reached global status. Countless celebrities and fashion icons chose his clothes and further brands continued to offer collaborations. In February that year Arora was appointed Creative Director of Paco Rabanne. The house had failed to show a ready-to-wear collection since its founder left in 2006, Arora debuted the first collection since then, under his new role in October that year.

Manish Arora appreciates the idea of trends, but believes further in an individuals personality and own sense of style. Known for elaborate and avant-garde creations, Arora uses vivid colours and motifs, paired with traditional Indian beading and embroidery.