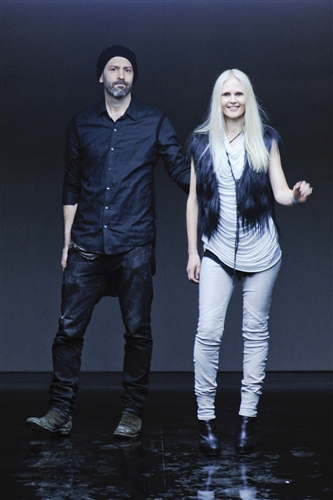 Helmut Lang’s parents divorced when he was three. The separation led to Lang growing up with his grandfather, a shoemaker. With an initial interest in business, Lang only ventured into fashion after he failed to find jackets and T-shirts that he liked forcing him to design his own.

In 1977 Lang decided to fully switch his career from business to fashion opening up a made-to-measure studio in Vienna. Two years later, he opened his first boutique selling his own designs.

His garments became successful around Austria, which encouraged Lang to expand across Europe. In 1986 Lang started to sell his designs in Paris. The same year he launched his namesake label.

Lang’s structured elegant silhouettes fitted in perfectly with the early 90s minimalism. With the brand growing, more lines were added to the businesses portfolio including footwear in 1990, underwear in 1995 and jeans in 1996.

In 1998 Lang moved to New York and launched his collection over the internet, a first for the fashion industry. The following year Lang launched his first fragrance.

In 1999 Prada bought a 49% stake in Lang’s business, enabling the company to open boutiques across Europe and expand the line. The following year Prada obtained a 51% stake in the business, giving them overall control.

In 2005 Lang walked away from the company unhappy in not having full creative control. The business carried on without Lang. In 2006 Prada sold the business to Link Theory Holdings Co, who hired Michael and Nicole Colovos to push the brand forward. The company has stated that Lang is welcome back at any time.

With the legacy of an artist, Helmut Lang is a cult figure in fashion. His deconstructive urban style features monotone colours and austerity couture. Renown for his razor sharp lines, Helmut Lang’s designs breath minimalism.