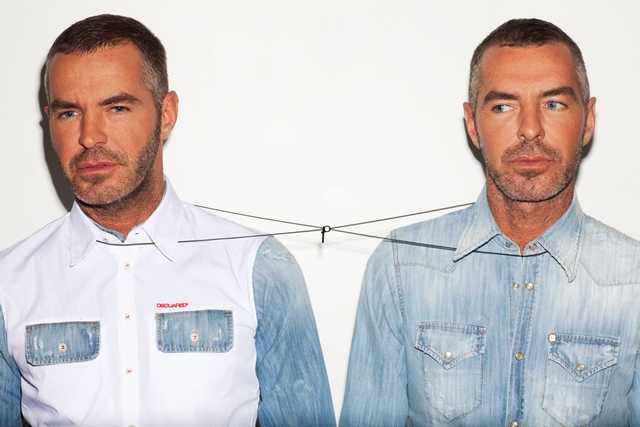 Born in Canada, the twin brothers Dean and Dan Caten moved to New York in 1983 to attend the Parson’s School of Design. Only staying one term, the brothers left and decided to return to Toronto. Securing a financial backer in 1986, they launched their first womenswear collection ‘DEanDAN’. Two years later they were signed onto the label Ports International as creative directors, aiming to update the company. During this time Dean and Dan were designing a low-end brand, Tabi International.

In 1991 the brothers moved to Milan, where they began designing for Gianni Versace and Diesel. After collaborating with many of the most important fashion houses, Dan and Dean gained financial backing from Diesel to launch their namesake brand.

In 1994 the brand debuted their first menswear collection the ‘Homesick Canada Collection’. Their first menswear show marked the beginning of a long succession of runway extravaganzas. The following year a men’s footwear partnership began with Galizio Torresi.

Known for their collaboration of music and fashion, Dsquared2 started the fusion when designing 150 outfits for Madonna’s music video ‘Don’t Tell Me’ and for her 2002 Drowned World Tour.

In 2002 the company premiered the womenswear line during the Spring/Summer Men’s Collections runway show in Milan. The following year Dsquared2 debuted the first womenswear collection ‘Star 24/7’.

In 2003 another musical collaboration took place, with Dsquared2 providing the wardrobe for Christina Aguilera’s ‘Stripped Tour 2003’.

The same year Dsquared2 won a succession of awards including the ‘La Kore’ award for Best Emerging Designers and the GQ Magazine’s ‘Men of the Year’ Award as Best Breakthrough Design Team. The following year the company designed an exclusive trainer for the Olympic Games in Athens.

In 2005, Christina Aguilera walked in a Dsqaured2 runway show, finshing with her stripping male models of their clothes on the runway.

In 2006 the company was awarded again with the Golden Needle Award. The same year they designed Juventus Football Club’s official uniforms as well as starting a fragrance and cosmetics partnership, leading to their first men’s fragrance ‘He Wood’.

In 2007 the brand launched a women’s footwear line and were awarded by Spanish GQ with ‘Man of the Year’. 2007 saw the use of celebrity in runway again with Rihanna entering the stage in a car, following with her walking down the runway.

By 2008 the company had launched boutiques in Capri, Istanbul, Kiev and Hong Kong, as well as launching their first women’s fragrance. 2008 also saw the duo awarded again as ‘Man of the Year’ from German GQ.

In 2009 more boutiques were launched in Cannes, Dubai, Singapore and Hong Kong. The same year they designed for Barcelona Football Club’s official off-field uniforms. A year later in 2010, Dsquared2 used Bill Kaultiz to open and close their Autumn/Winter menswear show in Milan.